STATEMENT OF PURPOSE AND PRELIMINARY RESULTS
FROM FIELD EXPERIMENT AT HILMARTON, JULY 2001

It was our purpose in making these formations to test several assumptions about the phenomenon of crop circles, in situ, by replicating, as best we could, a geometrical area of flattened wheat in an English field. This we did with the farmer's permission.

We were interested in testing, firstly, how difficult it would be to make something geometrically accurate and attractive, and, secondly, how difficult it would be to make something large. What we found is that with an inexperienced team of researchers, several being nearly 70 years of age, we could rather easily construct what you see in the pictures. The team leader, Peter Sorensen, drew a sketch on the spot and we followed his directions for practical execution. We made mistakes and corrected them, ran out of time and finished the job the next day. We made the tools ourselves by guessing what they should be. It was not difficult to do what we did. Working in the dark presented no problems as our eyes adjusted to the conditions. At no time did we resort to using external light.

We tested the electrostatic energies of the area first with the TREK-520 meter before we made any of the formations. There were no anomalies noted. After we pushed down the crop for the first practice ring in the corner of the field we measured the ES again and found it had doubled in the flattened area. This was expected and explainable by the contour of the isostatic field changing with the shape. Before the large formation was begun we prayed and invoked spiritual energies in a positive way. We cast our intent strongly here and the result with the ES meter was a four-fold increase in voltage in the resulting formation, similar to what we have measured in previous, so-called genuine formations in years past. The physical appearance of the lay of the formation, while sort of messy due to our inexperience, clearly showed some of the hallmarks of what we had considered previously to be evidence of 'genuine' circles. Without trying we created wavy, stream-bed-like flows in the flatted crop, which looked like the result of energy, not mechanics. From the air, the stomper board patterns are clearly visible and appear similar to the patterns seen in other 'genuine' formations. Colin Andrews and others have pointed out this as evidence of human involvement in the past.

Surprisingly, we created random standing stalks and false magical bends, which serendipitously happened as a result of the mechanical process. Also the splay of crop against the standing wall was similar to many other 'genuine' circles we had seen over the years. The scarring on the bloom of the top of the wheat shaft was minimal, perhaps, because we had waxed our boards in case it was wet when we did the project.

There are clearly some assumptions about evidence and causation of previous crop circles that appear to have been cast into serious doubt by our research experiment. We suggest that other researchers should make legal formations in order to test for themselves the common assumptions being put forward about many crop circles.

We do not claim that this little experiment explains away the entire mystery of crop circles, just that some of the common assumptions may be in doubt. In fact it seems to us that the real mysteries are more interesting; there is a lot to be learned in these fields.

We were also interested in seeing if any associated paranormal phenomena would be seen from our effort, even though the field was located near R.A.F. Lynham, which may have been a reason we did not perceive direct contact that night. However, it is curious to note that a design similar to Peter's appeared as a circle a night or two later in Cambridgeshire, the Gog-Magog 'Angel'. Our first night's effort left a large standing crescent, (Phase1), which we flattened the next day, (Phase2). Although the 'Angel' formation is stunningly beautiful and much more skillfully done than ours is, is it just possible that our design and/or effort may have been echoed? Could this be an indication of contact with the original phenomena? Or is it possible that Peter Sorensen intuited a design that was in the collective unconscious, so to speak, and we were the first to lay it down? 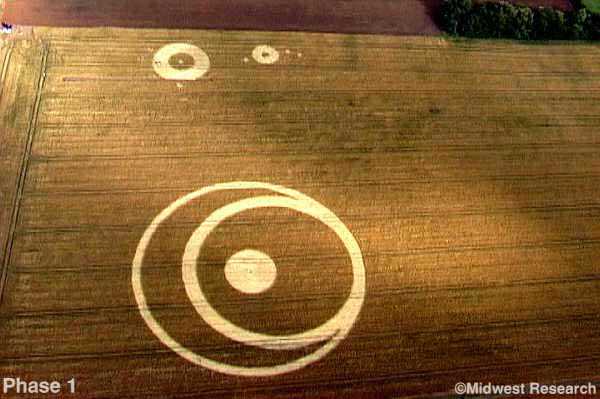 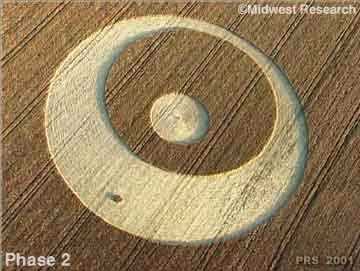 Peter says, "We had not intended to make a big formation that night but over dinner the group decided to do so, and I created a design on the spot. The geometry came to me within seconds and I scribbled a diagram on the back of a menu, without any thought except that it had to be large, and yet something our amateur team could accomplish."

"Designs based on off-center circles are not unheard of but they are rare and for two similar geometries to happen like this is quite a coincidence. If I didn't know better I would attribute both designs to the same artist!" 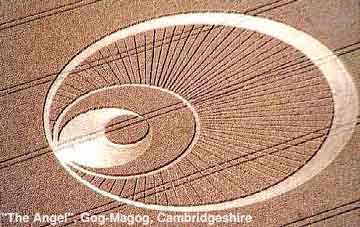 We feel there is much more to be accomplished. While we are quite sure there is an original, non-human phenomenon causing some of the circles, the majority of formations in England could have been man-made, extrapolating from our experiment. Still, it is a beautiful, if covert art, of significant value, with many mysterious, tangential aspects that beg explanation. We feel that our modest experiment has added to the bank of cerealogical knowledge, and wish for it to be tested and repeated by other researchers. It is now up to the crop circle community at large to think about some of the more prevalent dogmatic assumptions that are often made about the cause and effect of crop formations.

I was lucky enough to be invited by Ron Russell to visit this formation on the second day (as they were finishing off 'Phase 2' of the flattening. The main purpose of this visit was to see if I could detect anything on my various items of electronic equipment, as I have been researching the electro-magnetic effects of crop circles since 1991.

In addition to some home-constructed detectors I used two items of commercial, calibrated equipment; An OPTO Electronics 'Scout' RF sniffer and an AOR-8000 radio scanner (should anything measurable be detected).

PHORM PROHIBITED
The contents of this site, and communications between this site and its users, are protected by database right, copyright, confidentiality and the right not to be intercepted conferred by section 1(3) of the Regulation of Investigatory Powers Act 2000. The use of those contents and communications by Internet Service Providers or others to profile or classify users of this site for advertising or other purposes is strictly forbidden.