Paul Vigay summarises the events up to date | Autumn 1994

Nineteen ninety-four was certainly a significant year for the crop circles. In fact, it could be said that the subject has come 'full circle'. Before 1991 and Doug and Dave came forward to make their claims, there was not the widespread hoaxing and misinformation going on that has occurred in recent years. The circles had a certain innocence to them.

When D&D made their claim in 1991, the circles community began to fall apart. Experts needed to re-assess their criteria for genuineness and to re-evaluate their research. Some dropped out of the subject, which others injected a new level of enthusiasm into themselves - After all, who really believed D&D's claims after all?

Well, it seems that the media did, which in turn made the general public believe it was all one big hoax. Doug and Dave may not be the worlds best hoaxers but they sure are good debunkers. With believers losing interest as fast as D&D can say "fooled you!", the phenomenon was left with a certain numbness.

Of course, as stated in Enigma 3, the biggest problem the hoaxers have is the unpredictable nature of the genuine phenomena. As soon as D&D owned up and publicly stated that they would be making no more circles, what happens?

Yes, in 1992 circles continued to appear. Of course, D&D then come up with the excuse that someone is copying their idea. Full marks for originality!

I'm not going to waste time discussing the various groups of hoaxers who would like us to believe that they did indeed copy D&D, merely to state that they seemed to have had the desired effect. ie. people lose interest and researchers get the generic term 'crank' or 'nutcase'. In fact, I often get the comment, "Oh, you're not still researching those crop circles. I thought they were all hoaxed."

During 1992 and 1993, with less media coverage and sightseers trampling farmers fields, the serious researchers were able to continue their work in relative peace. Circles still appeared and hoaxers would still try to claim them. If theres one lesson the hoaxers learnt, it was that it's far easier to 'claim' a formation, than to 'actually' go out and make it.

Despite more and more crop watches and nightwatches, no hoaxers have been caught yet. Perhaps they have mastered the art of invisibility. No! Judging by the intelligence of some hoaxers I have met, I think the best they can manage is to get themselves seen lurking around the day after a formation has been discovered, so that less thorough researchers will believe, mistakenly, that the formation has indeed been man-made.

During the quiet years of 1992/3 some quite interesting results began to manifest themselves. Scientists began to realise that perhaps there was a genuine mystery after all. This seems to have been emphasised by the events of 1994 so far.

This year saw interest returning to the media. They, at last, realised that the hoaxers were merely small pebbles in the vast ocean of the circles mystery. They wanted to investigate themselves, to find out more about this perennial puzzle. Now that the media had decided to give the subject a fair crack of the whip, the knock-on effect was that the public became interested once more.
"Oh-dear", thought the hoaxers. "Did we fail to debunk the subject?" Yes they did fail, so out they come from the wood work to try and throw confusion on this years' formations. The whole phenomenon seems to move in cycles: Hoaxers try to debunk, the public lose interest, researchers carry out experiments without interference, interesting results are discovered, media interest re-awakens, public gains interest again, hoaxers must try to debunk again.

So continues the happy games played in the corn fields of the world. On the following few pages, I have displayed some of the varied formations discovered and surveyed during the 1994 season. I have deliberately refrained from labelling them genuine or hoax (apart from the well-publicised Arthur C.Clarke hoax) My purpose being to merely report on my findings and let you, the reader, make your own mind up.

Wherever possible I have tried to keep the diagrams to scale and include as many measurements as possible without making the end result too cluttered. As anyone who has seen them will verify, my original sketches are very much more ineligible, but if anyone wants exact dimensions and/or scales in imperial or megalithic yards then please contact me.

I would also like to take this opportunity to thank all those people who helped me to survey the formations out in the fields. It's only when you start measuring a formation yourself that you realise just how long it takes. Some took nearly four hours to measure; no doubt the hoaxers would say it only took them twenty minutes or so.

Anyway, wholehearted thanks are due to Vince Palmer, Chad and Gwen Deetken and Andy Batey, without whom it would have probably taken me several hours longer.

If anyone has any diagrams or aerial photos of formations they would like to include in future issues of Enigma, please feel free to send me any relevant information. Don't worry if you think I may have already seen it. Duplicated material is much better than material missed altogether. 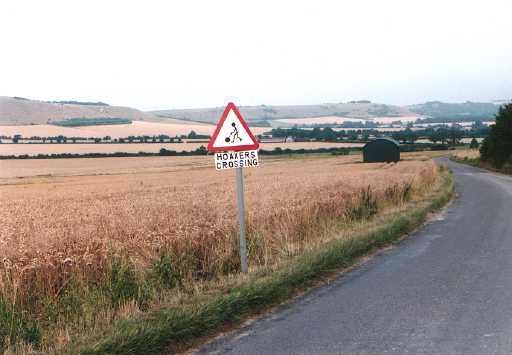 If you wish to add a comment to this article, please use the form below. Please note that by submitting comments using this form you are allowing all of the information submitted to be visible on this website. Your comment will be published immediately, so please proof-read before you add. Any comments deemed to be abusive or irrelevant to the topic of the article may be removed without warning.

If you would like to add a URL to another site, please enter the address (without http://) inside square brackets. Use an optional closing curly bracket to add a description. eg. to link to http://www.vigay.com enter [www.vigay.com}Vigay.com]

PHORM PROHIBITED
The contents of this site, and communications between this site and its users, are protected by database right, copyright, confidentiality and the right not to be intercepted conferred by section 1(3) of the Regulation of Investigatory Powers Act 2000. The use of those contents and communications by Internet Service Providers or others to profile or classify users of this site for advertising or other purposes is strictly forbidden.